Contract Award: General Dynamics to enhance and maintain US Command Post Of the Future (CPOF) 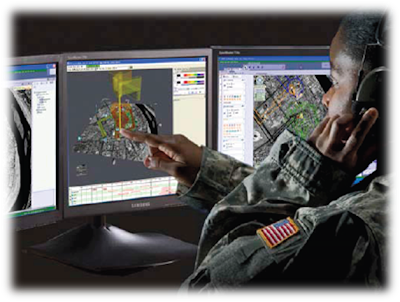 As announced in the US DoD Contracts Bulletin, General Dynamics was awarded a $78,000,000 contract for the procurement of software development and software maintenance efforts for the Command Post of the Future System. Work will be performed in Scottsdale, Ariz., with an estimated completion date of Sept. 26, 2013. One bid was solicited, with one bid received. The U.S. Army Communications-Electronics Command is the contracting activity.

These three areas are highly integrated in a single system to enable the commander and his staff to see information, interact with it (to understand it and create new information), and to selectively and dynamically share their evolving understanding of it for analysis, planning, and execution.
CPOF's greatest strength is it’s easy-to-use collaborative environment. In other automated command and control systems, collaborative tools are often an add-on or a specific application that must be engaged. In other cases, existing systems are forced to use various messaging formats or database transfer procedures. These information exchange techniques place a significant burden on the user to actually initiate the transfer and identify all addressees. CPOF’s basic environment is collaborative from the moment the system is turned on. All one has to do is drag and drop a visualization product into the “Shared Products” region, and it is instantly shared withall registered users. CPOF operators do not have to acquire an extensive repertoire of hot key and other commands to operate the system.

CPOF users at any level can assemble workspaces out of smaller tool-and-appliance primitives, allowing members of a collaborating group to organize their workflows according to their needs, without affecting or disrupting the views of other users. CPOF's Tool-and-appliance primitives are designed to let users to create quick, throw-away mini-applications to meet their needs in-situ, supporting on-the-fly uses of the software that no developer or designer could have anticipated.
The Context

Originally a DARPA technology demonstration, in 2006 CPOF became a US Army Program of Record. The prime contractor on the CPOF program is General Dynamics C4 Systems, which purchased the original developer of the software in 2005.

CPOF is used 24/7 in Operation Iraqi Freedom and Operation Enduring Freedom as a Key C2 System by Army and Marine Corps units. Over 3,000 systems have been fielded and over 1,200 systems are currently deployed from Corps to Battalion.

Search this Blog (and pages linked from here)

If you want to provide comments or suggestions on the blog you can contact the author.